Settling into our home | The Mindful Therapies Centre

Settling Into Our New Home

It has now been six months since we moved into the new Mindful Therapies Centre in Carliol Square. And we are now just in a position to stop and catch our breath and reflect on the year that has passed.

Back in May 2017, Mindful Therapies was almost four years old and working on its biggest contract so far. We were working in Darlington, training teachers and teaching assistants to deliver mindfulness in schools. It was an exciting and ambitious project but was also exhausting. We were looking forward to the summer so that we could have a break and decide what to do next.

Just as we approached summer we received news from our landlords at the office building where we were based that we had four months notice to leave. We always knew that the office space was temporary – it was set up as a charitable venture to provide affordable office space for not-for-profit businesses – but in many ways this could not have come at a worse time. We were exhausted and now had a new challenge to deal with.

A space for our new home

The first month was spent searching for suitable accommodation. We had an opportunity to really think about what we wanted for the future. We drew up a wish list. And some of our ideas were more realistic than others! There were so many options! Did we want city centre or out of town? Did we want a shop or a cafe as part of our space? Could we have a garden? And more importantly, what could we afford? By sheer chance we found a city centre basement unit that had bags of potential – with a little imagination. 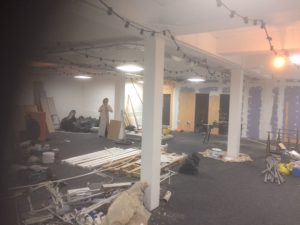 By the time we found the space that we wanted we only had seven weeks to renovate and it was a huge job. The space was 2000 square feet, a good deal larger than we had previously, and needed a lot of work. We had a vision of what we wanted – a space or meditation, counselling, getting together, and for working collaboratively. A home for mindfulness in the North East. We were overwhelmed by the support and kindness we received. Volunteers gave up their time, contractors worked far beyond what they had been paid to work, and many supporters made financial contributions to the renovation.

Even so, we were still working right up to our tight deadline. The launch was to take place on Saturday 4th November at 12pm. At 11:30am, we were still putting up the Mindful Therapies Centre signs and blowing up balloons. But we managed it and our opening day was a huge success. It was an opportunity for a shared celebration and a sigh of relief. 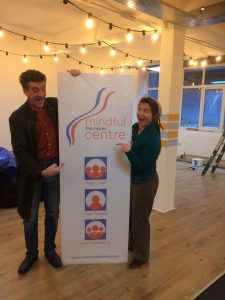 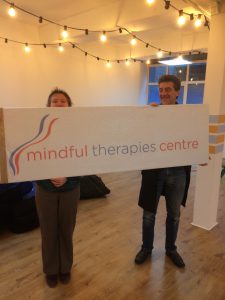 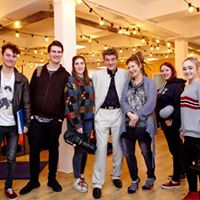 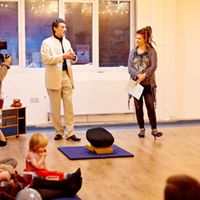 Since then we have been settling in and letting people know where we are. We have launched a huge timetable of classes. We are the only meditation centre in the North East that runs classes every day. Slowly but surely the word is getting out there. Slowly but surely we are finding new ways of working. There have been teething problems such as managing the timetabling of events effectively so that the noise of one event doesn’t impact on another and there are still little tweaks to make. In April, we welcomed two new members of staff, Helen and Susie. Helen is our new community development manager and Susie is our new communications manager.

Overall we are really proud of what we have achieved. It is easy to lose sight of as it becomes ordinary and everyday. However, every time somebody visits us for the first time and tells us how peaceful and welcoming the space is, we are reminded of how far we have come. One day we would like to see a Mindful Therapies Centre in every city, enabling mindfulness to be accessible to everyone who could benefit from it. But for now we are going to enjoy what we have and be grateful to everyone who has supported us in achieving it. Mindfulness is coming home to our true self, our home is your home. We now have classes every day and look forward to seeing you in our lovely space. 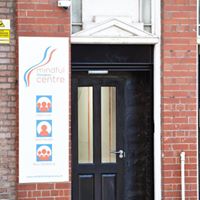 About the Author: Mark

This site uses Akismet to reduce spam. Learn how your comment data is processed.