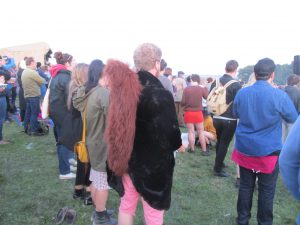 I have always loved music.  As a teenager the lyrics would often give me solace or at least an appreciation that I was not alone.  As a student I was fortunate enough to work at the University music venue and saw hundreds of bands over 4 years.  It was then that my love for live music developed.  My first experience of music festivals was Glastonbury, twice in the mid 1980’s. Then came along work, family commitments – growing up! I still saw the odd live gig and bought the occasional CD, but I rarely listened to anything new, I just listened to bands I already knew. Then in 2009 my best mate, Tony, who incidentally had not stopped devouring new music, suggested I join him at The End of the Road.

A small to medium sized festival in its 4th year, almost 100 bands and solo artists – and I had only heard of one! Now Tony loves his music and he had a full itinerary planned with 12-18 bands per day.  I saw at least part of 44 different performances over 3 days and nights, some great, some not so good. But I loved it and have not missed an End of the Road festival since. Each year Tony and I, and often his brother, will take our annual road trip from Newcastle to Dorset.  It was during this immersion in live music that we agreed the 3 song rule.

Now when I say part of 44 different performances, I saw bits of many more.  Some were just not my thing and the call of another stage, the beer tent, food or sleep would beckon. And so the three song rule was created – we agreed that we could only say we had seen a performer if we had stayed for at least three songs.  I forgot to mention two important considerations. Firstly, Tony and I do not always like the same music and therefore would not always watch the same act. Secondly, we are rather competitive, who saw the most acts became a running theme each day. One of the performances the other did not see invariably became the best gig of the day, festival, ever!

My resurgent interest in music  coincided with some major changes in my life.  Those of you who have read my mindful journey will be aware that in 2010 I was made redundant and began exploring meditation and mindfulness.  However it is only over the last 2-3 years that I have began combining mindfulness practice with my love of music.  In particular at gigs where I don’t know the band or the songs.

‘Deliberately paying attention, in a particular way, on purpose, in the present moment and non-judgementally’ – Jon Kabat Zinn

I now apply this definition of mindfulness to the 3 song rule at the festival and other gigs.

I listen, in a particular way to each song, focussing my intention on purpose to each song in the present moment with curiosity and non-judgement.  It works like this;

I listen with and to my body.  I notice how the sound makes me feel and makes me want to move. I allow my body to move with the music whether that be gently swaying, tapping my foot or pogoing like a teenager from the 80s!  I don’t try to make anything happen, nor do I try to stop anything – I just notice what is happening and let it unfold. Try it for yourself here. 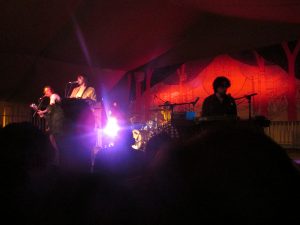 I now focus my attention on the sounds I can hear.  In turn I bring my full attention to each instrument, drums, bass, guitar etc and finishing with the vocals. The vocals can be tricky, I try to focus on the sounds rather than the words, hearing without listening.  Again I notice how this makes me feel, any emotions, thoughts or memories that arise.  I notice these thoughts and feelings without engaging with them using the sounds to gently pull me back into the present moment.  I also bring a sense of appreciation to the skill and talent of each musician and a sense of gratitude for the experience they are offering me. 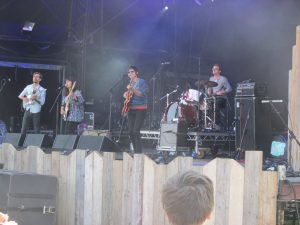 I have come to realise that we all listen to music in our own way, I have always focussed on the lyrics, often searching for a meaning or connection with the feelings, emotions or story being told.  Consequently the third stage is both the simplest and most difficult for me. During the 3rd song I bring the focus of my attention to listening to the words – my usual tendency – but without getting carried away with the story. I notice the feelings that stir without engaging with the emotional content, without trying to make it about me! 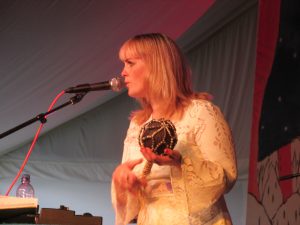 As the fourth song begins I reintroduce judgement – and make the choice to either stay or go!

About the Author: Mark

This site uses Akismet to reduce spam. Learn how your comment data is processed.